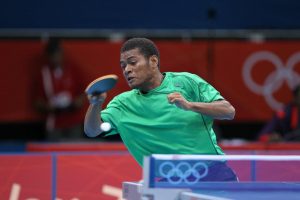 The first day of competition at the 2012 London Olympic Games saw all Oceania Table Tennis athletes in the Men’s and Women’s Singles events hit the court.

Anolyn Lulu (VAN) was the first to step into the limelight, in the 2008 Beijing Olympic Games she was a coach, and 2012 would see her debut on the tables. Facing Brazil’s Ligia Silva, Anolyn found herself on the back foot from the beginning, despite a valant effort in the second set, she was unable to threaten her opponent, and her Olympic campaign came to an end.

Justin Han (AUS) is on debut at the 2012 London Olympic Games, and his first opponent in the Men’s Singles event was Togo’s Mawussi Agbetoglo. Following a slow start to the match, Justin was able to control the match, and finish with a strong performance in his first Olympic Games contest.

Yoshua Shing (VAN) became the first male Table Tennis athlete from the Pacific Island nation of Vanuatu. The power of his opponent, Cuban Andy Pereira, was too much, and Yoshua was unable to trouble the scoreboard.

Miao Miao (AUS) lined up for her fourth Olympic Games appearance in the Women’s Singles event. The experience showed throughout the contest gave Miao the opportunity to progress through to the next round. After a strong start claiming the first two games, here opponent, Dana Hadacova of Czech Republic went on to claim the next two steps before Miao used all her experience to finish off the match.

Jian Fang Lay (AUS) lining up in her fourth Olympic Games, with her third appearance in the Women’s Singles event, brought in great experience on the international scene. Although a slow start, Jian was able to claim a strong win over Brazil’s Ligia Silva, claiming the next four sets.

William Henzell (AUS) the ‘veteran’ of the Australian Men’s contingent, playing in his third Olympic Games, William was looking to better his performances at the 2004 & 2008 Olympic Games. In a match that saw William claim the first three sets with tight score lines against his Hungarian opponent Adam Pattantyus, he was unable to finish the match in straight sets, but recovered to claim the fifth game, and defeat yet another higher ranked athlete.

Justin Han (AUS) lined up against Iran’s Noshad Alamiyan in the first round. A slow start from Justin made the going tough, and although his game proceeded to lift, he was unable to claim a game, and his Men’s Singles event came to an end.

Miao Miao (AUS) returning to the table following her first round win, Miao Miao was unable to continue the form against a much higher ranked Yi-Hua Huang of Chinese Taipei. Although putting up a strong fight in the second set, Miao was unable to claim the game and her run in the Women’s Singles event came to an end.