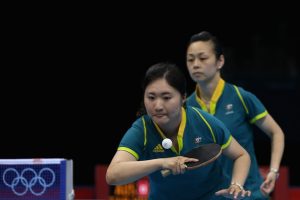 With the Singles Events won, and the medal ceremonies completed, it was time for the Team’s Events to commence.

Oceania has one team competing in both the Men’s Team Event and Women’s Team Event. Australia qualified as the representative following their results at the 2012 World Table Tennis Team Championships. The Team Event is a straight knock out event with 16 teams in total.