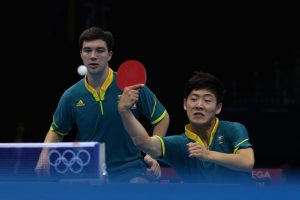 The second half, in the first round, of the Men’s Team Event saw Australia face Commonwealth rivals Singapore. Following the results from the singles event, Australia were looking to gain some more wins against higher ranked athletes.

Australia (Robert Frank, Justin Han and William Henzell) started as underdogs against the Commonwealth Games Gold Medallists – Singapore. Singapore’s number 1, Gao Ning, played strongly to give Singapore a great start to the match defeating Justin Han in straight games. Zhan Jian (SIN) followed suit with a straight games victory over William Henzell. Australia needed to win the Doubles match to keep their dreams alive. Justin Han paired up with Robert Frank against Zhan Jian and Yang Zi (SIN) after a nervous start, the Australian’s were able to claim the third set, however this was as close as they came. Singapore claimed the Team’s Match 3-0, and move onto the Quarter Finals.