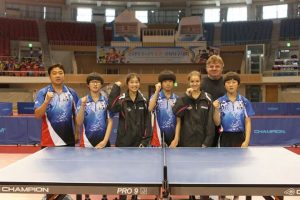 Sarah Tan of Australia represented Oceania at the Korea vs ITTF ‘With The Future in Mind’ Challenge Match to celebrate the 50th Anniversary of the Korean Junior Table Tennis Federation.

The ITTF WFIM Team was made up of athletes from all six continents, and the challenge match included Junior Boys and Girls, and Cadet Boys and Girls Team Matches.

Sarah was part of the triumphant Cadet Girls Team, where she partnered Romania’s Andreea Clapa. Although Sarah was unsuccessful in her singles matches, she combined well in the doubles to win in four tight sets, to go along with Andreea’s two singles wins.