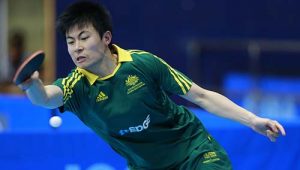 In 2009, Heming Hu and Kevin Wu teamed up for Team Oceania at the International Cadet Challenge, staged in Tokyo Japan. Three years later, the pair was on opposing teams representing their respective countries – Australia and New Zealand.

In the Boys Singles Event at the 2012 Volkswagen World Junior Championships, staged in Hyderabad, India; the pair both reached the main draw of the event.

For further information about their results, please click here.