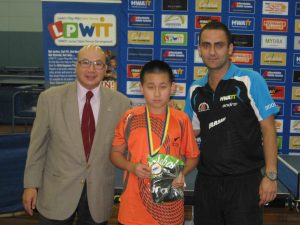 Following a strong performance in the Teams competing, which placed New Zealand in the Quarter Final, both Yang Lun and Hui Ving excellend in the Singles event, as well as Zaki, who all made it into the Main Draw.

The star of the show for Oceania was Yang Lun Zhao who produced great results, and reached the Quarter Finals. Following the perfomances throughout the week, Yang Lun was awarded with selection into the ITTF Hopes Team for 2013.

Yang Lun will be joined by ten other 11 and 12 year olds as they train and compete later this year.

A fantastic achievement for Yang Lun!