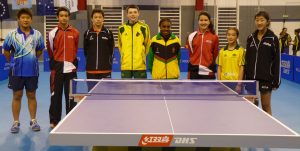 Staged at the Salle Omnisport Anse Vata in Noumea, New Caledonia on Sunday 11th August 2013, the ITTF-Oceania Cadet Challenge was the home for a cauldron of intense competition.

It brought together the brightest prospects from throughout the Oceania region to battle for a place in Team Oceania, to compete at the forthcoming ITTF World Cadet Challenge.

The ITTF World Cadet Challenge will be staged in the Slovenia city of Otocec from Saturday 26th October to Sunday 3rd November.

“The matches were closely fought throughout the entire day”, explained Michael Brown the Development Officer for the Oceania Table Tennis Federation. “Following the first stage of round robin group matches; the top six athletes in the Boys’ and Girls’ Singles events were drawn together to determine the final placing.”

Ticket Booked
Tense matches followed with the host association having cause to celebrate.

“Playing in front of a home crowd, Lea Lai Van was looking to confirm her place in Team Oceania for a third consecutive year”, added Michael Brown. “Following a series of strong results, she was placed fourth in the event and confirmed her ticket to Slovenia.”

Simply Awesome
Success for Lea Lai Van who was delighted to be en route to Otocec.

“Qualifying for the third time and last time, since it’s my last year is awesome; I’m really happy to get the chance to compete amongst the world’s best players”, smiled Lea Lai Van. “This year I am aiming for a Top 20 placing.”

Coaches Named
Furthermore, the names of the coaches were also determined.

“David Powell, a former member of Team Oceania at the 2006 World Cadet Challenge will coach the Boys’ Team, while New Caledonia’s Cathy Gauthier, the 2012 and 2013 Pacific Cup Champion will coach the Girls’ Team”, explained Michael Brown. “Both David and Cathy are current athletes, role models that the cadet athletes look up to.”

Hard Work Ahead
Certainly David Powell is looking forward to the challenge of coaching the best cadet players in the region and the planning has already begun.

“We have a few months of hard work ahead of us, on and off the table to prepare the team in the best way possible to achieve our goals”, he stressed.