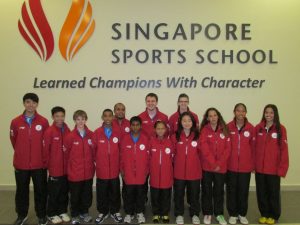 The 2013 ITTF-Oceania Talent Team was selected based on athlete’s results at ITTF- Oceania events during the previous year, and looked to provide young athletes with elite training environments to assist them in their development, and potential future representation of their national association and/or Oceania.

Accommodation and meals were provided at the Singapore Sports School, which was in dormitory style rooms, and a large dining hall providing three meals daily. During the weekends, the dining hall is unavailable due to no students being on-site at the school, and therefore food options were available within walking distance from the school for the group.

During the period in which the team was in Singapore, there were two days, which involved no table tennis, and a half-day rest on the second Saturday. This allowed the group to undertake some sightseeing, and also watch the Singapore National Table Tennis Championships for one afternoon. The sightseeing included the Marina Bay precinct, including the Marina Bay Sands and Marina Bay Gardens. The final free day provided an opportunity for the group to go shopping on Orchard Rd.

These experiences outside the Singapore Sports School allowed all members of the group to be exposed to a new culture, and provided an insight into how other cultures operate, therefore providing a greater understanding of the world that we live in.