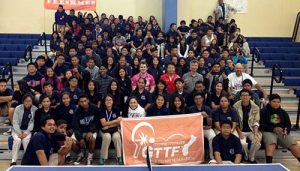 Host in late October and early November 2012 for the ITTF Cadet Challenge, the western Pacific island of Guam was the home for a recent ITTF Development Project Course.

Organised under the umbrella of the ITTF Development Programme, in conjunction with the Oceania Table Tennis Federation, proceedings commenced on Monday 24th February and concluded on Thursday 6th March 2014.

The expert on duty was Michael Brown, the Oceania Development Officer.