Vanuatu Prepares for the Immediate and Long Term Future 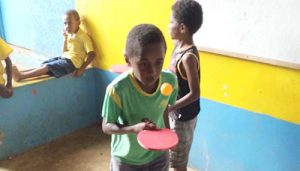 Situated in the South Pacific Ocean, some 1,090 miles (1,750 kilometres) east of northern Australia, the archipelago of Vanuatu was the home for an Olympic Solidarity Technical Course from Friday 14th to Monday 24th March 2014.

Organised under the auspices of the ITTF Development Programme and in conjunction with the Oceania Table Tennis Federation, the home for the whole itinerary was the Vila Table Tennis Gymnasium in Port Vila, the republic’s capital and largest city.

The Course Conductor was Michael Brown, the Oceania Development Officer.