Major Championships Ahead, Tuvalu a Nation with Designs on Success 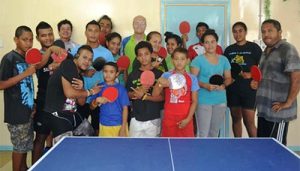 Formerly known as the Ellice Islands, situated in the Pacific Ocean, half way between Hawaii and Australia, Tuvalu is the home for a current Developing a National Sports Structure Course.

Funded by Olympic Solidarity and organised under the auspices of the ITTF Development Programme, proceedings commenced on Thursday 6th March, the whole itinerary scheduled to be completed on Sunday 6th July.

Matters are organised in two distinct sections with the expert on duty for the first part being Australia’s Brett Clarke; his initial stay of office will conclude on Thursday 10th April, prior to the commencement of the ITTF-Oceania Hopes Challenge which is followed by the K-Sports 2014 ITTF-Oceania Cup and Oceania Championships.