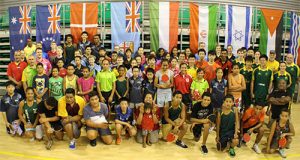 A player in the New Zealand city of Auckland at the Stag 2014 World Veteran Championships which concluded on Saturday 17th May, on the next stop of the Oceania itinerary it was back to being a coach for Sweden’s Peter Karlsson.

Not only was it back to being a coach, it was back to the future.

The Cook Islands is slightly under a four hour flight from Auckland but it is the other side of the international date line, so there is virtually a one day difference in time, 22 hours; for example 3.00pm in Auckland is 5.00pm in the Cook Islands on the previous day.