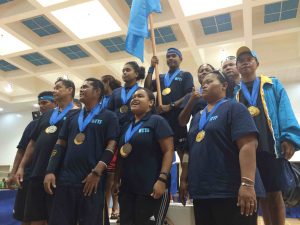 Palau, an island situated in the western Pacific Ocean with a population estimated at just over 20,000 inhabitants, dominated matters in the table tennis events at the Micronesian Games in Pohnpei which concluded on Tuesday 29th July.

They completed a clean sweep of titles winning gold in every event on offer; Ramon Gulla and Jeremai Orachel Watanabe emerging the most successful players on duty.