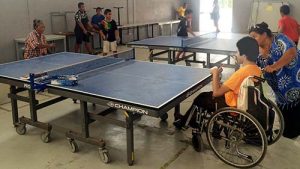 Situated in the South Pacific, Nauru with a population of less than 10,000 inhabitants, the second smallest state in the world with only the Vatican City being less in terms of residents, was the recent home for a PTT Level One Coach Education Course.

Organised under the auspices of the ITTF Development Programme in conjunction with Oceania Table Tennis Federation, the course was made possible thanks to support from the Korean manufacturer Xiom.

The company had made an equipment donation in 2012.