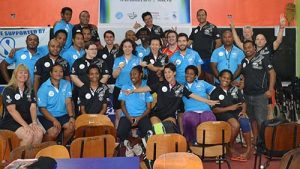 Situated in the South Pacific, Fiji, an archipelago of over 332 islands of which 110 are permanently inhabited is the current home for a visit from Michael Brown, the Oceania Development Officer.

Matters commenced on Monday 12th January with an ITTF/PTT Level One Coach Education Course which will be followed by Course Conductor Training and a Training Camp. The whole itinerary is due to conclude on Monday 26th January.

Supported by Olympic Solidarity and organised under the auspices of the ITTF Development Programme, Suva, the capital of Fiji located on the south east coast of the island of Viti Levu, is the home for the entire proceedings.