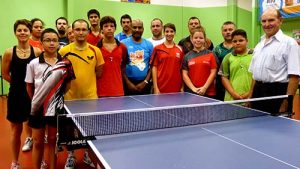 Conducted by Pakistan’s Arif Khan, an intense training camp commenced in New Caledonia on Friday 23rd January; the task for the experienced coach and former international being to prepare the national team for the forthcoming Pacific Games.

Held every four years, the multi-sport event will be staged later this year in Port Moresby, Papua New Guinea; it is the prime event for countries in the region.

Overall the training camp lasted 17 days with the focus being on those players vying for selection; eventually five men and five women will be chosen.