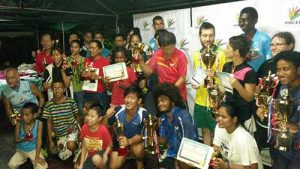 The player to lead Australia at the 2015 World Team Cup, staged just under one month ago in Dubai, David Powell won the Men’s Singles title at the Pacific Energy 2015 Fiji Open which concluded on Sunday 25th January; a tournament with a special significance.

It is one of the tournaments on the “Road to 2016 ITTF-Oceania Cup” in which eight men and eight women will qualify from a series of events held in 2015.

At the final hurdle David Powell overcame Yoshua Shing, the young man who represented Vanuatu at the London 2012 Olympic Games.