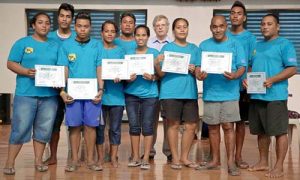 Home for the 2015 Oceania Challenge staged on Tuesday 12th May; prior to the tournament commencing, Tarawa, the capital of the central Pacific island of Kiribati, was also the host for a Basic Certified Umpires Course.

Organised under the auspices of the ITTF Development Programme, the expert on duty to conduct matters was Australia’s Dave Delpratt, the referee for the ensuing tournament and the immediately following Oceania Junior Championships.

Intense activity in Kiribati and at the end of proceedings everyone concerned was able to reflect in the fact that a series of highly successful events had been organised; none more so than the umpires’ course which saw 10 of the 11 students emerge successful.