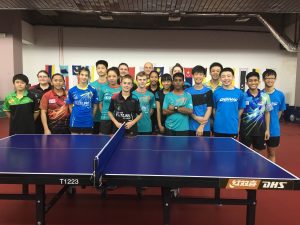 The Oceania Cadet Team finalised their preparations for the 2015 World Cadet Challenge with an intensive training camp in Kuala Lumpur, Malaysia. The team trained with the Malaysian National Junior & Cadet squads, which provided a high level of practice.

Following four days of tough training, which involved a lot of multi ball, a series of matches also took place in which the leading Boys were able to gain a series of wins.