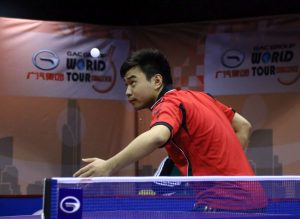 Qualification rounds for the ITTF Challenge Thailand Open kicked off yesterday with two Australians in action.

Rohan Dhooria was unable to get off the mark in either Men’s or Under 21 Singles, while Anthony Zhao was able to a game on the board against Thailand’s Supakron Pankhaoyoy, however he went down 4-1.

Anthony is philosophical in defeat after day one came to a close.

“There are some clear cut differences between us and the Asian players. One judgement error and you’ll get caught on the wrong foot or see the ball spin immensely with a lot of pressure on their attacks; the ball literally flies into your face. But it’s awesome to come here to make friends and to play table tennis and improve.”

Anthony is not only competing, but hoping to set an example for the younger generation of players; there is no reason you cannot be an active player while still studying.

“I hope that I learn lots from this tournament and can help contribute to helping younger juniors in their game development and also hope that more Australians can participate in these tournaments while juggling studies, so that we can be a stronger team and in the future that we can catch up to the top players overseas.”

Qualification rounds continue today with both players still in action.

“I’ll try my best to survive the remaining matches. I didn’t come to Thailand to pick balls off the ground instead of playing good table tennis.”