Norby Ocampo; focused on his game and Guam 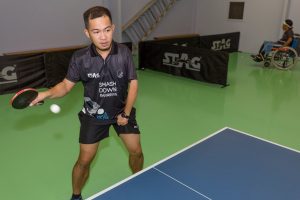 We are now two weeks out from the ITTF-Oceania Para Championships to be held in Fiji and one athlete from Guam is in the midst of his preparations.

Norby Ocampo, a para athlete from Guam is currently in training for the region’s biggest event.

“I was able to practice twice this week at the gym. I manage to train twice in the morning before going to work and after work at home I practiced my service.”

In 2016 Ocampo brought home five medals from the championships, but in 2017 he doesn’t just have medals on his mind.

“As far as winning in my class, I would love to. If not, I will make sure to give my best. It will be very competitive. But being part of this event is more than enough to be happy, because I know I will learn new things again which I can share to our island.”

While improving his own game is a top priority, Ocampo is equally concerned with raising the playing level of Guam.

“Since I started going to these international tournaments, I have been able to share everything I’ve seen and learned to other players. The goal if possible is to have more Guam players on our team at the next ITTF-Oceania Championships.”

The development of table tennis in Oceania depends on people like Ocampo spreading their knowledge and experience. He is also proactive in creating a competitive scene in Guam, organising tournaments for the players to test their skills.

“This will be my first time in Fiji. It will be another long flight coming from Guam. But it’s all worth it. It will be fun and competitive. I am expecting new friends as well.”