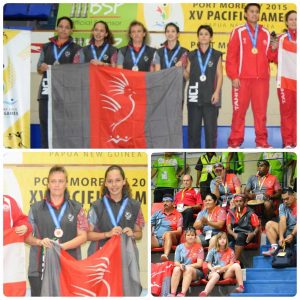 It’s going to be a busy week for Vanina, competing in both the senior and junior events, but she will definitely benefit from the experience.

“During the week of the competition I want to give, first of all, the best of myself and not to finish last.”

Despite her modest goals she isn’t going to be intimidated by the larger teams from Australia and New Zealand. New Caledonia may only be a small country, but that doesn’t mean it can’t make a big impact on the Oceania region with their competitive attitude.

“I want to reach the top six in the ITTF-Oceania Cup and I also want to surprise my opponents and show them that even if we are a small country, we train hard.”

Vanina certainly isn’t one for sitting back and enjoying the peaceful island lifestyle, she leaves that for the tourists.

“I am in the last year of high school and sometimes it’s difficult to balance studies with table tennis. I train ten hours a week, so my week is very busy. But I think I’m ready for the championships.