One medal missing for Kane 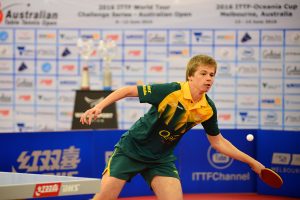 After finishing his studies last year majoring in Pure Mathematics at the University of Sydney, Australian Kane Townsend jumped on a plane and moved to train full-time in Tokyo, Japan.

“I’m living in Japan preparing for the ITTF-Oceania Cup, the World Table Tennis Championships and the 2018 Gold Coast Commonwealth Games.”

With the ITTF-Oceania Cup less than two weeks away, it will be the first test for Kane. He has played in the event three times and has two silvers and one bronze medal to his name.

“Finally getting the cup would be nice.”

The Australian number three is leaving no stone unturned to try take top place on the podium.

“After finishing university in November I started a new physical program. I’ve moved from 78kg down to 71kg. While for on table training I’m currently at Tokyo Fuji University under coach Mr. Nishimura. He was the Japanese National Women’s Coach in the early 2000s. I’ve actually been training with a women’s team; their style of play has helped improve my speed and recovery time.”

Will the faster and lighter Kane Townsend finally get the gold medal he’s missing when he arrives in Suva for the ITTF-Oceania Cup?