Umpire and referee courses a success in Suva

by Stephen Gillespie and Wade Townsend from ITTF.com 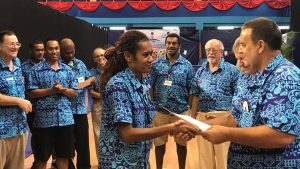 A successful ITTF National Umpire’s Course was conducted in Suva, Fiji on the 10th of April 2017. Under the guidance of course presenter Stephen Gillespie (AUS), eight of the nine participants passed the course. All the attendees had previously passed an ITTF Basic Certified Umpires Course.

The next step was for these umpires to obtain practical experience in a tournament. This was fairly easy this time because starting on the 13th of April, Suva hosted a combined tournament which included the ITTF-Oceania Junior and Para Championships and the ITTF-Oceania Cup. Participants were able to get a variety of experiences during the tournament, including all important exposure to umpiring matches involving players in Class 1 to Class 5. During the ITTF-Oceania Cup the umpires also attained valuable experience working as a team, with these matches having an Umpire and an Assistant Umpire assigned to them.

A Basic Certified Referee’s Course was also run prior to the combined ITTF-Oceania events. With only two participants, the course was an intimate affair and offered plenty of opportunity for detailed questions and answers. With the course emphasising the calculation of Group Results and the correct way to perform draws, there were two people in desperate need of breaks to avoid brain overload. After the better part of two days of course work and exercises, it was time for the all important exam.

After the completion of the exam there was one successful candidate, with Henry Yee (FIJ) passing the course. In doing so, Yee became the first person outside of Australia and New Zealand in the Oceania region to pass the Basic Certified Referee’s Course; a significant milestone in the development of ITTF-Oceania. The next step for Henry Yee will be to Referee at some tournaments, as either Referee or a Deputy Referee.