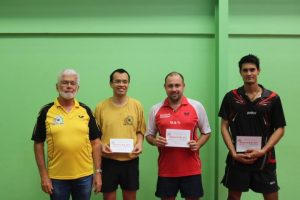 The Criterium Championship was held 22nd-23rd April, hosted by the club AS Magenta in New Caledonia last weekend. It was part of the Elite Tour and saw the country’s top athletes in action.

The tournament was carried out as mixed divisions, with junior, para and open categories.

The junior events had both Under 12 and Under 15 singles. In the youngest category Magalie Chen finished in first place, while in the Under 15’s final Ronan Aubry got the better of Killyan Fichter. Meanwhile, Avelino Monteiro took out the para division.

Morgan Le Frapper defeated Lorie La 12-10 in the fourth to take top place in Division 2, which had a considerable turnout of 43 entries.

The highest placed female finishers in Division 1 and 2 were also awarded for their efforts. Jade Pabouty was first after she finished 16th in Division 1, followed by Lorie La finishing 2nd place in Division 2, while Vanina Santino took third after a fourth place finish in Division 2.

Checkout the photos from presentation below.