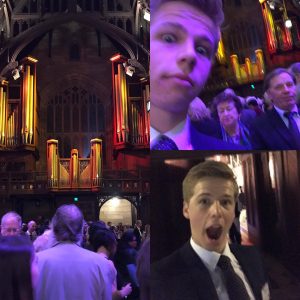 Australia’s Kane Townsend, recently back from winning silver at the ITTF-Oceania Cup, attended the University of Sydney’s Annual Alumni Awards last Friday night. The event celebrates the achievements of alumni and honours their contribution to the university and wider community.

During the course of the evening he won the Nigel C. Barker Medal. The award honours graduates who have achieved academic excellence and enriched the life of the University and broader community through sporting achievement. Barker himself was arguably the University of Sydney’s first Olympian and Olympic medallist; an impressive achievement for Australia’s oldest university.

Townsend completed a Bachelor of Science in Pure Mathematics with First Class Honours in 2016.  Since then he has been training full time in Japan for the 2018 Gold Coast Commonwealth Games, but during his spare time has been writing and preparing a paper for academic publication.

The student athlete continues to be an integral part of the Oceania region’s development.