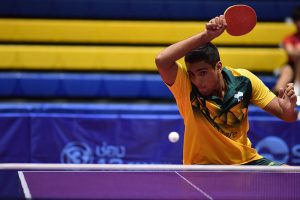 The qualification rounds for the Australian National Senior Top 10 got underway this evening. With six players fighting it out for the last available spot in the main draw, it’s going to be a tight race.

Leading the pack after three rounds is Rohan Dhooria. Recently back from Fiji after winning silver in the Under 18 Boys’ Singles at the ITTF-Oceania Junior Championships, Dhooria made it three from three in his opening matches.

Close behind Australia’s number one junior is Dominic Huang and Dillon Chambers. Both had a single loss, and with two more rounds left to play tomorrow, they are still in the running to qualify.

With the winner of the Top 10 securing a place at the 2018 ITTF-Oceania Cup, there is a lot on the line. The main event will get underway at 1pm local time (GMT+10) after the final qualifier is determined.

Checkout the full results from the opening rounds here.