Australia go down to Great Britain 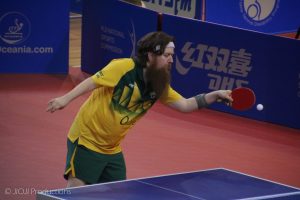 The Australian outfit of Nathan Pellissier and Trevor Hirth competing at the ITTF PTT Slovenia Open went down to a solid Great Britain in the Class 8 team event last night.

Great Britain proved too strong winning 2-0, with the Aussies unable to get a game on the board in their singles or doubles match.

The team will look for a better performance against the Netherlands, who also struggled in their opening encounter against Great Britain.

The matches are perfect preparation for the pair who will be competing at the 2017 PTT Team World Championships in Slovakia, which gets underway in a weeks time.