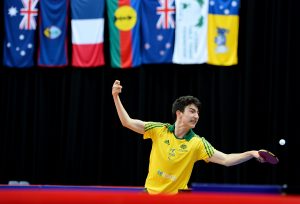 The Netherlands brought an end to Australia’s chances of progressing to the knockout stages in the Class 8 team event at the ITTF PTT Slovenia Open. After going down to Great Britain the previous day, Nathan Pellissier and Trevor Hirth were looking for a win to secure a place in the main draw, but found the Netherlands too strong, going down 2-1.

Nathan Pellissier was able to get a win on the board for the Aussie team, taking down Johannes Van Amerongen 3-1 (9,-8,7,7). It was an impressive win for Pellissier, with Amerongen ranked at number 22 in the world in the Class 8 category.

Unfortunately it was a straight games loss for the pair in the doubles and for Hirth in his matchup with Jean-Paul Montanus.