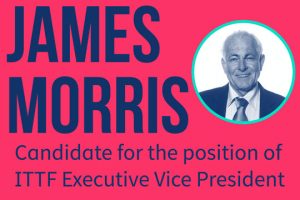 President of ITTF-Oceania since 2014, Mr James Morris has been nominated by Table Tennis New Zealand for the position of Executive Vice President for the International Table Tennis Federation.

The announcement of the nomination means there are two candidates from Oceania vying for a position on the ITTF Executive Committee, as Mr Patrick Gillmann announced his candidacy back in January this year.

Mr Morris has been a driver for the development of ITTF-Oceania since taking on the role of President, which included securing the Strategic Investment from ITTF to help roll out the newly adopted 2017-2020 ITTF-Oceania Strategic Plan, as well as appointing the first full-time professional staff into ITTF-Oceania.

“It is a very exciting time for the ITTF, with recent improvements under the leadership of Mr Thomas Weikert. In Oceania, we feel that Mr Weikert should be given the chance to lead the ITTF for a further four years as President, because of his investment into the Continental Federations, and his commitment to transparency within the ITTF.” – James Morris, ITTF-Oceania President

Click here to see the Candidate Profile of James Morris.

The relationship between ITTF and ITTF-Oceania has further strengthened in recent months, and this was evident through the visit of the ITTF President, as well as the other candidate for the position of ITTF President, Mr Jean-Michel Saive, to the ITTF-Oceania events held in Fiji last month.

“We respect both candidates for the position of ITTF President, and following their visit to Fiji last month, it was great to hear their plans for the future of table tennis. Having said that, we believe that Mr Weikert should be given a full mandate, as he has only been in the position for two and a half years, as this will allow him to continue the strong work he has been doing in his role as President. We look forward to providing the regions support for his candidacy.” – Anthony Ho, ITTF-Oceania Deputy President, and President of Fiji Table Tennis Association

The support is not only seen within the larger members of ITTF-Oceania, but can also be seen by some of the smallest members of the table tennis world, with Tuvalu also expressing their support for the enhanced relationship between ITTF and ITTF-Oceania.

“Tuvalu, being a small country, is very fortunate to be part of the ITTF family. We have received many benefits from ITTF in terms of developing the sport in the country and I believe that it would only do Mr Weikert justice if we support him as ITTF President for a full term. This would allow him to further strengthen his working relationship with ITTF-Oceania and small island countries like Tuvalu.” – Alan Resture, ITTF-Oceania Management Committee, and President of Tuvalu Table Tennis Association

The election for the ITTF President, as well as the eight positions of Executive Vice President, will take place on 31st May at the ITTF AGM, held in Dusseldorf, Germany; during the World Table Tennis Championships.