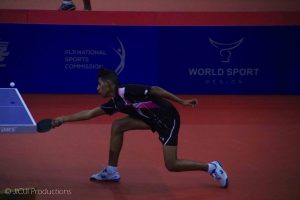 Papua New Guinea’s Geoffrey Loi has been nominated for the SP Sports Awards Junior Male Athlete of the Year. A member of the bronze medal winning team at the 2017 ITTF-Oceania Junior Championships, Loi’s nomination means he is down to the final three athletes in the category.

For the past twenty years as part of the PNG Olympic Committee’s program, the SP Sports Awards has recognised the nation’s top sporting personalities.

Chairperson for the SPSA Selection Panel, Moses Koiri said, “Being nominated is an achievement in itself as it demonstrates recognition by the sporting community and public at large. However, there can only be three finalists for each category and one final winner, when announcements are made during the presentation night. But it’s important to note that they are all outstanding sportsmen and women in their own right.”

The awards evening will be held May 27 with Australian rugby league legend Wally Lewis the guest speaker for the event.