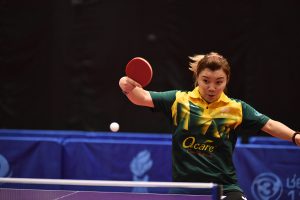 Australia’s Jiamuwa Wu upset the seeding at the ITTF SET 2017 Thailand Junior & Cadet Open as she progressed to the quarter-final of the Junior Girls’ Singles.

The Aussie came in to the event as the 13th seed, but with 4-1 win over Naja Mekamporn (THA) in the last 16 found herself competing for a spot on the podium. Unfortunately she went down to number two seed Asuka Sasao (JPN) 4-1 in the quarterfinal.

Meanwhile, Rohan Dhooria (AUS) was able to progress to the last 32 in the Junior Boys’ Singles, but went down in straight games to Hong Kong’s Chun Kit Lau 11-4,11-5,11-6,11-5. This is the third appearance for Dhooria on the World Junior Circuit, after competing in both Italy and Australia, and is well on track for being the Oceania region’s representative at the 2017 ITTF World Junior Circuit Finals.