Up and down day for Australia at World Para Team Championships 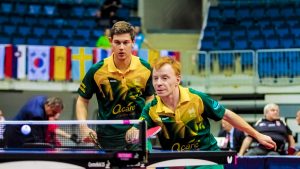 The Class 11 team of Sam Von Einem and Rory Carroll got off to a perfect start taking down Japan 2-0. In the opening doubles match the pair kept things under control, only dropping game, winning 3-1 (5,7,-8,6). Von Einem kept the match short and sweet, finishing off Takashi Takeda 3-0 (7,7,5). The pair will face Hong Kong tomorrow.

Meanwhile the Class 8 team of Nathan Pellissier, Barak Mizrachi and Trevor Hirth had some rough encounters in their opening rounds.  Despite taking a game in both their doubles matches, the Aussies went down 2-0 against Great Britain and Chinese Taipei.

But in the face of a rough day at the office, the team is staying positive.

Checkout the complete results from the opening day here.