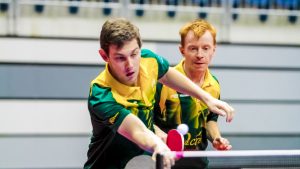 Sam Von Einem and Rory Carroll had defeated Japan in their opening match to ensure a place on the podium. But it was two close calls that followed for the team, going down to both France and Hong Kong 2-1, meaning they narrowly missed out on a higher place finish.

Meanwhile the Class 8 men’s team of Nathan Pellissier, Trevor Hirth and Barak Mizrachi had to make do with fourth place in their group, after being unable to get a win on the board.

Checkout the full results from the event here.