Tahiti excited as they head to Düsseldorf 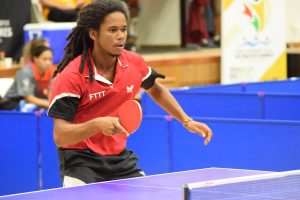 Tahiti will be competing at a World Championships for the first time, as the largest island in French Polynesia makes their way to Düsseldorf for the Liebherr 2017 World Table Tennis Championships.

“I am really excited to play and participate to the World Championships in Düsseldorf. I have been practicing a lot outside of my study time. I never stopped playing table tennis actually, trying to participate to every tournament. I played the France Table Tennis University Championships, and a couple of other events before heading to Düsseldorf.” Ocean Belrose

Competing in Germany means a lot to Belrose, and he isn’t going to let the chance go by without showing off some of his best table tennis.

“This is going to be awesome! I can’t wait to be part of this! I’m going try to increase my level on every point at this event, and win the most of victories possible. I’ll maybe also make a behind the back-shot or backhand around the net.” Ocean Belrose

Meanwhile, Hugo Gendron is just going to soak up the experience.

“Actually I don’t really believe it ! It’s a big experience, for sport and as a human experience. So I’m really exciting about this trip and I just hope to win maybe one set and why not a match.” Hugo Gendron

The pair will join Kenji Hotan  while Brenda Lui and Tearo Le Caill will be battling it out in the Women’s Singles draw in Düsseldorf.