Underdogs from Down Under 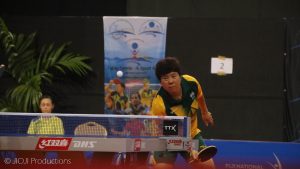 Australia defines itself as a sporting nation. It’s almost un-Australian to not love sport, the green and gold uniform and the boxing kangaroo. But table tennis isn’t exactly on the radar for most Aussies.

Playing table tennis in Australia is like being part of an underground club. Everyone has a hit and giggle of garage ping pong with a stubby in hand. But as soon as you take the sport seriously you move in to a secret society of misfits and malcontents that makes you an outsider at most social gatherings.

That doesn’t mean the Australian table tennis scene doesn’t have a lively heartbeat, and at the Liebherr 2017 World Table Tennis Championships the nation will be well represented, with all eyes on Jian Fang Lay and David Powell to carry the team in Düsseldorf.

Lay is an Australian stalwart and the forty four year old doesn’t have any plans on retiring. She is 57th seed in Düsseldorf and has a place in the main draw. In Suzhou two years ago she made it in to the round of 64, losing to the exceptional Mima Ito. In 2013 and 2011 on both occasions she made the round of 64 and lost to Li Jiao 4-2.

A pengrip twiddling player with pimples on one side, Lay is many players’ worst nightmare. With the right draw a round of 32 or last 16 place could be possible.

As with the majority of table tennis players Down Under, table tennis has to go hand in hand with a regular nine to five job. Powell is no different.

“I’m working full time now teaching Year 6 in Melbourne, so that is taking the majority of time, unfortunately training has to come second.” David Powell

But the working life doesn’t mean his expectations at the Liebherr World Championships are any lower.

“I’ve played at every World Championships since 2010 and I’ve had some success reaching the main draw before – I’d like to try match that performance.” David Powell 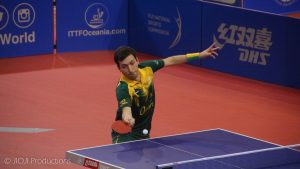 Two years ago in Suzhou in David Powell defeated Tomas Treadler. It was a massive win for the young Aussie and a rollercoaster ride from beginning to end. Powell led 3-0 but lost three consecutive games  11-2,11-2,11-5. But somehow he managed to snatch victory from the jaws of defeat an
d took the final game 11-9.

Since then Powell has had the Olympic experience, and it may help him moving forward.

“Having competed at the Rio Olympics gives me some confidence that I will be used to the conditions I’ll find in Dusseldorf.” David Powell

They may not be medal contenders in Düsseldorf, but the Australians are going to make sure they are seen and heard before the tournament ends.