World Refugee Day was established to show that the global public stands with refugees. It is held every year on June 20th to commemorate the strength, courage and perseverance of millions of refugees. In 2017, World Refugee Day also marks a key moment for the public to show support for families forced to flee.

To mark the occasion, ITTF-Oceania met up with Yasir Hussaini. Yasir is a member of the Australian Para table tennis team and also a refugee.

When Yasir was six-years old, following the kidnapping of his brother by the Taliban, his family fled Afghanistan and sought asylum in Australia.

“I don’t remember much but the memories on the boat to Australia I remember well. I remember being rushed at night on to this wooden boat that looked like it was going to fall apart any minute. I remember the big waves hitting the boat and throwing us from one side of the boat to the other.”

Families that flee their homeland may be escaping a dangerous situation, but often will have to face uncertainty and peril as they try to reach safety. Yasir’s journey was no different.

“I remember the boat stopping and not working in the middle of nowhere. Thankfully after forty minutes of endless praying and a few men playing around with the engine, it started up again. A six year old Yasir didn’t really understand the gravity of the situation, but I remember Mum crying and praying that we get to where we need to be safely.”

Refugees and immigration is currently at the forefront of political discussion and policies. When it comes to the public having a better understanding of what it means to be a refugee, Yasir believes it starts with communication and the language we use.

“It’s a cliche, but it’s important that the divisive language used when talking about refugees is left out of discussions. This idea and language of ‘us vs. them’ is harmful and only perpetuates misconceptions. We are humans, we share more in common than we do differences. We all value and strive to attain a lifestyle that meets our basic human rights. We need not only to be welcoming but interact with refugees and learn about them, all the while they learn from us as well and are better fitted in our country.”

Yasir now wears the green and gold, representing Australia in table tennis on the international stage. It was at high school that Yasir had his first encounter with the sport, immediately gravitating to the game. 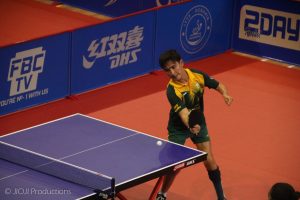 “I saw table tennis being played in high school for the first time. The aspect that lured me in to trying it was that it appeared to be easy, and fun. Something I could do. I love the accessibility of this sport, anyone could give it a try.”

What started out as a bit of fun ended up being more than just a hobby.

“After playing at school for a couple of years, I went to a talent search and met with the Australian Paralympic table tennis manager at the time and she said that if I work at it, I had the potential to go further with it. Already in love with the sport, I had this new found belief that I could make it in the Australian team. I started training a few times a week with an additional personal coaching session. The regime is much more intense nowadays.”

Sport is always about adapting. But for an athlete with a disability there becomes an extra obstacle to overcome.

“The main accommodation is that I serve one handed. My cerebral palsy affects my left arm and leg, making it impossible to serve normally. With the unsteady base, it’s important for me to have a strong serve game, making it easier to rally knowing where the ball is going to placed after the serve. ”

While Rio Paralympics was only last year, Tokyo 2020 feels like it is just around the corner and Yasir has his eyes firmly set on the representing Australia at the games.

“I want travel and compete more, get more experience under belt and work towards qualifying for the next Paralympic Games.”

Life isn’t just all table tennis for Yasir. He recently graduated from the University of Adelaide and when it comes to his future occupation, Yasir is looking to put his convictions to practice.

“Having table tennis as an escape helped with my studies. At the end of last year I finished a double degree of Arts majoring in Philosophy and Psychological Sciences. University life was a challenge but fun. It was character building. I am now unemployed and applying for work. Jobs that are people centred; I love working with and helping people.”

With more than 10 million stateless people around the globe, now is the time to show your support. Share Yasir’s story and use the hashtags #WorldRefugeeDay and #WithRefugees to show that the global public stands with refugees.