Two days to go until the Australian Open 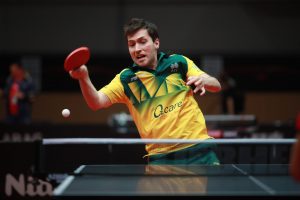 We are just two days out from the 2017 Seamaster ITTF World Tour Australian Open! The event will be the richest stop on the World Tour this year with US$400,000 total prize money up for grabs.

Host nation Australia will be out in force with a forty person team attending the event. Meanwhile, New Zealand will also be representing the Oceania region with a four man squad, with Tengteng Liu leading the Kiwi charge.

Jiang Fang Lay will be Oceania’s best chance at a deep run in the event. She is currently ranked no.96 in the world and is competing fresh off the back of a round of 64 appearance at the Liebherr 2017 World Championships.

With hosts Australia receiving two players straight in to the main draw of both the Men’s and Women’s Singles, Jian Fang Lay and David Powell won’t have to negotiate their way through the qualification stages. The top ranked Aussie athletes will find themselves straight in to the round of 32.

In the men’s draw, Jun Mizutani, the no.1 seed, will be looking to defend the title he won last year in Melbourne. But with Koki Niwa, Chuang Chih-Yuan and Vladimir Samsonov rounding out the top four seeded positions, Mizutani will be looking at a more difficult tournament this time around.

In the women’s event, Zhu Yuling is the no.1 seed, but all eyes will be on no.5 seed Miu Hirano. Seventeen year-old Hirano has had a sensational nine months, winning the Women’s World Cup and the Asian Championships, and also taking a bronze medal at the Liebherr 2017 World Championships.

The event will reach a global television audience of more than 80 million people, with the competition taking place in the newly constructed Gold Coast Sports & Leisure Centre which is located in the sporting precinct for the 2018 Gold Coast Commonwealth Games.