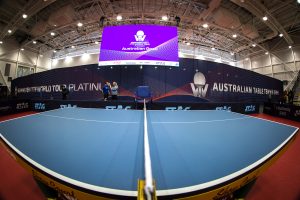 Australia’s Jian Fang Lay and David Powell will be making their main draw appearances tomorrow at the Seamaster 2017 Australian Open.

David Powell has drawn Gao Ning (SGP), the world no.40 and the highest ranked player from the qualification rounds. Powell knows the match is going to be difficult, but plans on staying positive and dictating the game.

“Playing Gao will be a tough challenge, I’ve never come up against him before but I’ll just focus on my own game and be as aggressive as possible” – David Powell

Meanwhile Jian Fang Lay will face Lee Eunhye (KOR). On paper it looks like being a closely fought contest. Lee is world no.91 while Lay is just five places below at no.96. Will Lay’s 22 years of extra experience help her on the court tomorrow?

The Men’s and Women’s Doubles main draw will also be underway. An all Oceania clash is on the cards with Australia’s Heming Hu and Xin Yan coming up against New Zealand’s Tengteng Liu and Zhiyang Chen.