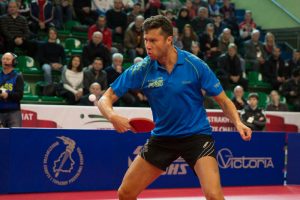 A World Tour title on every continent. The most World Tour titles in the history of the sport. Vladimir Samsonov aka Vladi is a living legend and took out the recent Seamaster 2017 Australian Open on the Gold Coast.

One of the keys to claiming the title against Simon Gauzy was the Belorussian’s unbelievable counter play. Today we will be looking at Vladi’s counter, why it is so good, and what the opponent can do to stop it.

In the final Simon Gauzy knew he was going to have to stay closer to the table. If he stepped back he was never going to power through Vladi’s defensive skills. He also needed to be playing a lot of forehands from the middle of the table and the backhand half if he was to put a dent in his opponent’s defences.

The problem was, looking for pivot forehands left Gauzy’s forehand half exposed. Vladi looked to abuse this area of the table by directing most of his counter play to the wide forehand corner, even from his own backhand half, leaving Gauzy scrambling for the ball or just watching it go by.

So why was Vladi’s counter so good?

In Vladi, the hips, the biggest bone in the human body, is completely stable. Through the kinetic chain from foot to bat, he isn’t leaking any power. His gut is pulled back, creating space to execute the stroke and also allowing himself to be able to swing down on the ball. From these two things he can have a relaxed arm. If you stress you can cause deviations in your swing. That is not a good thing for accuracy and consistency. Also, the elbow is forward on the backhand as well, allowing for a more stable and powerful shot, and also disguising the direction when making the down the line plays. By having such a consistent and stable swing, Vladi is able to fully utilise the momentum of the ball, perfectly timing his contact near the top of its rise.

So if you’re on the other side of the court to Vladi’s counter backhands what should you do?

For that take a look at two of the Belorussian’s last two losses; Lee Sang Su at the World Championships in Dusseldorf, and Tomokazu Harimoto at the China Open.

Both of these players hit rapid fire high tempo backhands cross court. They were relentless, taking the ball early, not looking for power, but instead trying to maximise the frequency.

The Frenchman’s backhand, while quick, isn’t played at the same tempo as either Lee or Harimoto.  High frequency play is a style of play more often seen in Asian players, particularly those from Japan and Korea Republic, who often lack the physical power of their European counterparts.

So when you hit the tables for practice next time, look to stabilise your body, particularly the hips, to maximise your chances of using the ball’s momentum.

And then look to increase the tempo on the backhand side. Don’t stress or go for power; don’t think Kalinkos Kreanga, think Lee Sang Su. Then you will be ready for facing Vladi next time you step on to the court.