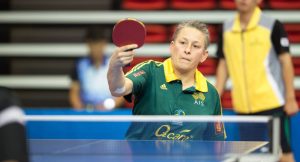 Australia is out in force at the Korea PTT Open with a squad of 12 taking the courts in Mungyeong.

Daniela Di Toro put up a standout performance and is through to the semifinals of the Women’s Singles Class 4-5. She defeated her group’s top seed 3-1. But with three players each with one loss, it went to a three way count-back, with Di Toro finishing second in her group. She will now face top seed Kang Oejeong (KOR).

Melissa Tapper kept a clean sheet, cruising through her opening two group matches in the Class 10 Women’s Singles, and has one group match remaining.

In the men’s side of the draw Connor Holdback upset the odds and defeated Kim Chang Hee (KOR) 3-1 in the Class 6 Men’s Singles to secure second place in the group and move through to the quarterfinal. It was a tough contest with Holdback taking two of the games 14-12.  He will now face Japan’s Junki Itai. Nathan Pellissier, fresh off the back of gold in Chinese Taipei is through to the quarterfinal in the Class 8 Men’s Singles, after taking out second place in the group stage.

Meanwhile, Sam Von Einem cruised through the group stage and is looking bent on defending his No.1 seeding in the Class 11 Men’s Singles