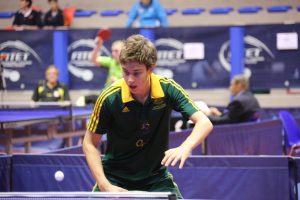 The team events got underway yesterday at the Korea PTT Open in Mungyeong, with Australia in action of the Oceania region. With a successful singles campaign behind the green and gold contingent were looking to keep the ball rolling.

Leading the Aussie charge is Sam Von Einem, who looks keen to upgrade his silver medal from the singles to gold in the Class 11 Men’s Team Event. He has partnered up with Russia’s Kemal Gayfullin, and the pair have topped their group with two 2-0 wins.

Meanwhile, Melissa Tapper is teaming up with Thailand’s Kanlaya Kriabklang in the Class 6-10 Women’s Team Event. Despite a 2-1 loss to Germany, the pair have secured a place in the semifinal where they will face crowd favourites Korea Republic.

Nathan Pellissier and Connor Johnstone have struggled in their opening encounters in the Class 8 Men’s Team Event and are yet to get a win on the board. Is the two weeks of intense competition finally catching up to Pellissier?