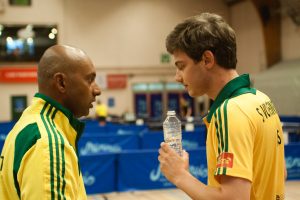 Sam Von Einem has pocketed his second silver medal at the Korea PTT Open in Mungyeong. Von Einem and partner Kemal Gayfullin (RUS) cruised through to the final of the Class 11 Men’s Teams, with neither dropping a match.

Unfortunately in the final the pair went down 2-1 to home team Korea Republic.

The only other podium finish came from a third place for Melissa Tapper and teammate Kanlaya Kriabklang (THA), as they went down 2-1 in the semifinal of the Class 6-10 Women’s Team Event.

Meanwhile, Daniela Di Toro and Amanda Tscharke had to make do with a fourth place finish in the Class 4-5 Women’s Team Event, while Nathan Pellissier couldn’t secure a medal to match his gold from the Singles with Connor Johnstone and Pellissier unable to get a win on the board in the Class 8 Men’s Team Event.