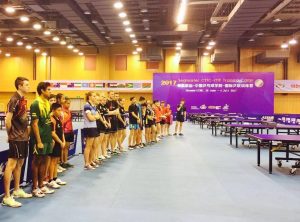 Australia’s Jake Duffy recently attended the Seamaster ITTF Training Camp at the China Table Tennis College, and was provide a scholarship through the ITTF-Oceania Development Program to assist in his attendance.

Checkout Jake’s experience below as he reports back on what it was like training in China.

The ITTF SeaMaster training camp held in Shanghai was an extremely rewarding and beneficial experience. It was both mentally and physically challenging in providing major insights into the current and future way table tennis will be played, and also on a more personal note, what I need to improve in order to compete at a high level internationally.

Generally, there were two training sessions per day, with one optional training session at night. There was also one rest day during the week. The sessions ran from 9-11 in the morning, with physical and stretching for 40 minutes afterwards. There was then a three hour break, where we would get lunch and rest before the afternoon session which ran from 3:15 and ended around 5:30pm. The optional night session would run from 7pm onwards and lasted for however long you wanted, usually entailing service practice or feeling exercises.

Each morning session began with a half an hour warm up which consisted of both static and dynamic stretching as well as a slow jog to get the blood pumping. During this time, we also did neuromuscular activation and balance exercises to ensure that all muscles were ready and primed for training from the get-go in order to prevent injury. Morning training would usually include a couple of footwork exercises, predominantly based around the forehand. These routines were very simple, and would usually go for ten minutes each. We would then move onto serve and return exercises, where there was a lot of free play, again, I believe, with the thinking of getting players accustomed to understanding different serves, spins and styles of play.  Training would finish with five minutes of short-short, and loop-loop rallies. Then came physical!

Two coaches who specifically assigned to physical and stretching. There was always physical after the morning session, and every day the exercises changed. From gym work, to the beep test, the physical coaches were trying to improve our overall fitness levels as this was the clear difference between foreign and Chinese players. Core Strength was a key target, as well as injury prevention in the shoulders, using elastic resistance bands. It was hard, but rewarding at the same time, and I will take a lot of these table tennis specific exercises back home with me in helping alleviate/avoid injuries and building strength and conditioning going forward.

The afternoon session was basically multi-ball. We would have one warm up footwork exercise, after a shorter warm up, and then get straight into multi-ball. The daily exercises were very similar, working on technique, especially off backspin balls, and speed. Big preference was given to in and out exercises, coming over the table, being aggressive, and then getting back out as fast as possible. After the multi-ball, we would again have at least 15 minutes’ worth of stretching, to cool the body down and recover for the next day. 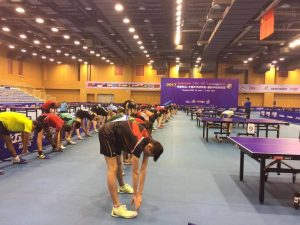 The quality of the practice highlighted the type and standard of training necessary for, a player like me, to compete internationally. This was the most insightful part of the training camp for me personally.

The coaches also provided some advice to fix some technique flaws which illustrated the preferred “Chinese Way” of playing table tennis. These insights highlighted major differences between foreign and Chinese teachings, literally what I’ve learnt growing up in this sport, versus what the best of the best learn. The major differences for me are especially predominant on the backhand side of my game.

The coaches were very big on footwork, with the ideology being that the faster you are in position, the better your chance of keeping the ball in play. Also, at the forefront of the training was the over the table game. Predominantly, being aggressive with flicks after poor short pushes, quality top-spins off half long balls, and reducing the risk of your opponent attacking first by keeping the ball low.

The biggest difference I noticed between the Chinese and the foreign players was their physical condition and abilities. They are so strong, and thus are able to make both short and big movements in a short period of time. This comes from weight training in the gym, and also fast explosive short movements and core strength exercises used in training drills.

If I had the opportunity to go again, I most certainly would.  This time round, I had some downtime as I finished my university exams the day before boarding the plane.  Next time, exams or not, I would step up my training because those initial days are tough without adequate preparation to match it with the best.  Luckily I have a personal trainer and gym membership. I have also had lengthy periods of overseas training so I maintain a good level of fitness and can adapt quickly to the pace of training in these camps. For those contemplating this level of training for the first time though, it is important to redouble fitness efforts beforehand.