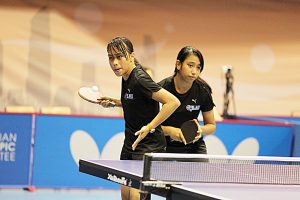 Not everyone will find themselves playing under the spotlights in front of a crowd like Fiji’s Grace and Sally Yee did at the beginning of 2016 as the pair competed for a spot at the Rio Olympic Games.

To start out the match both sisters are bouncing around on their toes. It’s a simple idea, but the best usually are. Try to own the court as early as possible. Let your opponent know who is in charge. You want to be as comfortable as you out there; it’s your house, everyone else is just a guest.

Next, checkout the rally at the 1:10 mark. Grace shows perfect timing. The first instinct when blocking is to slow down and let your feet go flat. But you can see that even when being defensive the knees and hips aren’t rigid and the feet keep rhythm with the ball.

Also, have a look at that backhand Grace plays to win the rally. It’s a world class shot. She reaches across the body to take the ball crisp and early. Sometimes your feet just cant make it. It’s a technique we are seeing more and more played by the likes of Ma Long, Fan Zhendong, and Wang Manyu. The opponent will expect the ball coming a lot later. You mess with the timing of the rally and change the pace. Grace is playing the ball at the optimal timing, but doing so in a surprising way. If you do use this reach across shot though, make sure you keep moving; reach, play the backhand, and then stay balanced by keeping your feet involved.

As the match goes on Sally is making her returns towards the centre of the table. Grace wants to keep things safe so steps across to use her backhand. If your opponent doesn’t have a big forehand don’t put pressure on yourself to make your returns too tight. Why complicate things? Make your life easy and play safe. It’s also about confidence. You are telling your opponent that you back yourself over them in an open rally. Make the return, bounce back to the centre and take control of the table.

The one theme that runs through all of these ideas is not being paralysed by the big occasion. Whether it is a local pennant or a national title, keep your feet moving during the rallies. Don’t get stuck to the floor otherwise you’ll have no balance or won’t find the correct timing.

Checkout highlights from the match below.