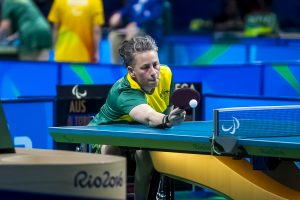 The Australian Paralympic Committee (APC) has established an Athlete Commission with the aim of giving more power to athletes in deciding the direction of Paralympic sport within Australia.

“It really is an exciting time for the Paralympic movement in Australia and to be honoured with the role of Vice Chair of the APC Athletes Commission is a real pleasure and a privilege,” said Di Toro.

“Kurt Fearnley and I took it upon ourselves as team Co-captians of the Australian Paralympic Team going into Rio last year to work on creating a proud, cohesive, respectful and successful team of athletes but also extending that to the broader Paralympic community.

“The view was to create an opportunity for athletes to have a meaningful voice within the context of the Paralympic Games with the hope that it filters down through the National Sporting Organisations to create the best environments for all our past and current athletes both on and off the field.”

So far the work has paid off and the response to the commission has been considerable.

“We got off to a great start with over 20 nominations for the AC from profoundly successful and accomplished athletes and human beings,” said Di Toro.

“Their knowledge and passion for the Paralympic movement is tangible with each of the 11 AC members looking to provide meaningful contribution to the betterment for all involved in Paralympic sport.”

While the Athletes Commission is in its infancy, it Di Toro sees a clear direction ahead of them.

“It is certainly early days for the AC but the roles and responsibilities of this group will include making recommendations to the APC on athlete-related matters, reviewing APC policies and directives and provide feedback to the APC regarding athlete concerns.

“Essentially we see the AC as being important and active conduits between the athlete cohort and the APC and hopefully the various NSO’s, as well as providing feedback to our IPC representative Kurt Fearnley at an international level and to the APC Board at home.”

APC Chief Executive Lynne Anderson hopes the commission will enable a new pathway for athletes and the APC to communicate.