Glenn Tepper; from Oceania to the World 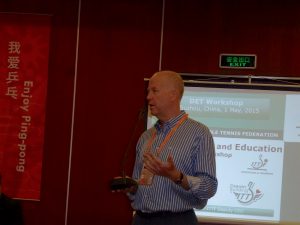 ITTF Deputy CEO Glenn Tepper recently announced that he would be stepping down from his role at the end of 2017 after 19 years of working with the federation.

The Australian has had a significant impact on table tennis around the world during his time at ITTF, but it is Oceania in particular that owes a great debt to Glenn’s time and talents.

It was Glenn’s father that first got him involved in table tennis. His father was a regional tennis champion, but table tennis was his off-season passion.

“In our small home town of 1000, my father and mother ran the table tennis association and at one stage forty percent of the population played weekly competition, which must be some sort of record at least from a percentage point of view,” said Glenn.

“I started off playing both tennis and table tennis, but a very wet summer holiday when I was nine years old, where four wet weeks were spent exclusively in the table tennis room, changed all that.”

His father was an innovator, not scared to apply the technical aspects of tennis court to the table tennis table. The result was a training system that was years ahead of its time.

“My father studied legendary Australian tennis coach Harry Hopman’s methods intensely and applied this to table tennis, resulting in him using advanced techniques, such as multi-ball, before it was introduced anywhere in Australia.”

It proved to be successful strategy which resulted in all four of the Tepper siblings representing Australia in table tennis on the international stage. All this was achieved in spite of being a four hour drive from the nearest major table tennis centre.

Once Glenn’s playing career was over, he had the sporting, academic and field experience in his toolset for taking on the task of growing table tennis in Oceania. In 1994 the Oceania Table Tennis Federation hired a part-time Oceania Development Officer, and Glenn was perfect for the role.

“Having a Physical Education teaching background which included curriculum development and being a school sports coordinator, playing for Australia for ten years including two years in Sweden and many trips to China, and working in a school for troubled youth seeing the power of sport to transform their lives, gave me the perfect background for the work I was about to embark on. It was just a matter of applying principles and organisational skills already in my repertoire to a table tennis scenario.”

The Oceania region has its own specific nuances and challenges that requires a very particular skill set. It is broad to say the least.

“We do not need the best coach in the world, but we need a passionate multi-skilled person that can introduce table tennis in a primary school in the morning, meet with the National Olympic Committee President in the afternoon and conduct an ITTF Level 1 Coach Education course in the evening, while assisting with a detailed development plan in their ‘free time’.”

After four years in the job on a part-time basis, the role suddenly expanded thanks to a couple of fortunate encounters.

“In 1998, a chance meeting with a key staff member from the Oceania National Olympic Committee (ONOC) during one of those courses led to an offer of support of US$30,000 per year. Adham Sharara also became ITTF President in that year, and another timely meeting with Adham in Australia in the lead-up to the 2000 Sydney Olympics meant ITTF matched the funding.”

The funding was what the region needed to give Glenn the resources to step things up a gear. It was a catalyst that affected development not only Oceania, but eventually the rest of the world.

“So with US$60,000 including my salary, my airfares, my accommodation and meals and local course costs we started. There was lots of sleeping on people’s floors and local buses and hitchhiking to balance the books but it was great days.”

In that period there was three very specific targets. Some of the countries had zero experience with table tennis; so that was an initial barrier that had to be overcome. Meanwhile, other nations had an active community, so an effort was made to facilitate their development towards international competitiveness.

“First, for the new National Associations it was very much about grass roots development and building National Associations from scratch. Next Targeting the already active countries to be competitive at international level. Vanuatu, Fiji, and Kiribati made a lot of improvements in that period with players like Yoshua Shing, Priscilla Tommy, and Freddy Choy. Australian players like Kyle Davis, Robbie Frank and Trent Carter were all successful internationally and the Team Oceania World Cadet Challenge Team actually had a match point to have a medal in 2006.”

Helping countries within Oceania to become fully fledged members of the Olympic movement was also a key point. Using table tennis as a platform, Glenn assisted nations in the region on their path to National Olympic Committee (NOC) status.

“It was a period when the ONOC was looking to have the maximum number of Olympic Committees so I was also helping Federated States of Micronesia, Palau, Marshall Islands, and Kiribati do what was required to obtain NOC status. One of those points was having at least eight memberships of International Sports Federations so that also helped Oceania in moving from eight members to the 24 we have today.”

Glenn’s work in Oceania proved so successful that ITTF wanted to take the program to the rest of the world. It was a keystone of ITTF’s innovative agenda during the late 90s and early 2000s.

“I was hired to set up the ITTF Development Program, initially as a pilot project in Oceania from 1999-2000, and then to bring it to the rest of the world from 2001. Earlier in my role with ITTF, I was more practical based, conducting a lot of coach education courses worldwide, being responsible for setting up the ITTF Coach Accreditation system and being author of the first ITTF Level 1 Coaching Manual, which was released in 2004.”

During his time at ITTF, Glenn has been able to tick off three huge goals that two decades ago would have seemed like pipe dreams. A worldwide Development Program was put in place, as was a global Coach Accreditation System. Perhaps most remarkably, ITTF became the first international sports federation in the world have every country on earth as a member, a target that was finally achieved earlier this year.

A lot of this success comes down to Glenn’s experience in establishing programs within Oceania. The position Oceania Development Officer has had a rich history with providing ITTF some of it’s most influential staff members. The complexities of the region provides an environment that develops talented staff members. Glenn led the way and carved a path for others to follow.

“Oceania has been fortunate with their Development Officer, I was the first and became ITTF Deputy CEO, Steve Dainton the second and has become ITTF CEO and long-time Marketing Manager, Michael Brown is also climbing steadily within ITTF, currently as the ITTF and Africa-Oceania Development Co-ordinator.

So what hurdles does Glenn see ahead for the Oceania region?

“Providing good solid athlete pathways is then the major challenge as our geography and hence costs has always been against Oceania,” says Glenn

But with ITTF signing a groundbreaking strategic investment with ITTF-Oceania earlier in 2017, the outlook is positive.

“Today there is another quantum leap underway with the hiring of a full-time CEO and an Events, Competition and Communications Officer in addition to the Development Manager.”

Glenn Tepper will officially sign off from ITTF on 31 December, 2017. The legacy he leaves behind at the federation and in Oceania will surely serve as the foundation for innovations and development heading in to the next decade.

ITTF-Oceania thanks Glenn for his service to the sport and wishes him all the success in his future endeavours, both in and outside of sport.