TT Technician: A defence of no spin serves 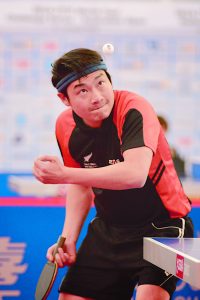 Everyone loves serving their opponent off. That little kick to your ego when you send a heavy backspin ball and the opponent pushes in to the net. It’s an omnipotent, godlike feeling.

But what about those of us who don’t have magician serves or elastic wrists?

Well how about serving without spin? Some think it’s only useful when you have a heavy backspin serve you can disguise it with. But this is a little uninspiring and ignores the sophistication of the sport.

Plus for many of us, service practice can get disheartening. We all know that one person in the club who just naturally whips up a storm every time they serve. More than likely they never made a conscious effort to get that good; to them it’s just instinct.  Ask for advice and they will say, hold your bat here, use your wrist, skim the ball more. But buckets of balls later and it hasn’t improved. Sure, you get a few more RPM on your serve, but it won’t make a radical difference to your game. We can’t all be Waldner.

The no spin serve needs a new publicist.

So what are you missing out on when you are solely focused on spin?

A ball possesses a lot more variables than just how much you can make it rotate. There is also length, speed and height variation.

Catch your opponent off guard by playing the serve both ultra short and floated slightly half long. Keep the action the same and you will have them second guessing their foot placement.

You can also mess with their footwork by playing with the speed of the serve. Whether they know it or not, your opponent is looking for patterns; it’s the subconscious’ default mode. Use this to your advantage. Increase or reduce the speed and your opponents feet will start to hate you. And don’t think that no spin is just about setting the ball up for a third ball attack. If you completely minimise the momentum on the ball the opponent may just not do enough get it over the net as they hesitate on the return. It’s not just backspin that can send the ball dunking in to the bottom of the net.

Then there is the other dimension that is almost entirely ignored; height over the net. Too often people are scared to send the ball a little high. Of course it isn’t a smart move to play the ball two feet above the table, but giving the ball some bounce will lead to their hand placement adjusting and hesitating.

When you combine using all dimensions plus speed, you will have your miss timing their shots, all without a single sign of rotation on the ball.

There is also one other hidden bonus of not worrying about spin. The banana flick actually functions best in opposition to spin. Remove the spin from you serve and effectiveness of the shot is negated. Sure, a no spin serve won’t be too difficult to flick, but who is worried about returning a plain top spin ball?

So if you think that you are only going to have good serves once you can serve more spin, then your game will stagnate. Additionally, when your sole focus is ball rotation, you will forgo the possibility of finding unique solutions to your opponent’s return game. Service is a moment of creativity, not just spin.