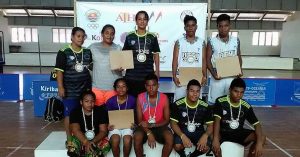 Te Runga, the multi-sports national games of Kiribati, was recently held with Nooa Takooa and Matita Korimai winning the Men’s and Women’s Singles titles respectively. Both had to see off past cadet stars to take the top prize.

But it is Men’s Singles champion Nooa Takooa who has by far the most interesting sports background. Takooa, who represented Kiribati the 2008 Commonwealth Youth Games in Pune, is not only a talented table tennis athlete. He has also represented his nation multiple times in athletics. A highlight surely being running in the Men’s 100m event at the London Olympic Games, where he ran a personal best time of 11.53 in the preliminary qualification round. You can checkout Takooa’s London 2012 race here.

Presentations at Te Runga in Kiribati ?????