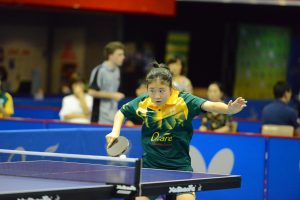 Australia’s Sue Bin Oh is back in Suva this week as Oceania’s best cadets assemble for the 2017 World Cadet Challenge in Fiji.

Earlier in the year the Aussie was in Fiji’s capital for the ITTF-Oceania Junior Championships, earning herself a silver medal in the Cadet Girls’ Singles and a ticket back to Suva as a member of Team Oceania.

“I am excited to travel back to Fiji again and meet new people as well as the friends I made last April,” says Sue Bin.

The fourteen year old defender has only been playing competitively for two years, but table tennis genes run in the family. Coached by her father, Nam Oh Ho, she has quickly picked up the sport and is now one of the leading juniors in Australia.

“I started playing table tennis because I wanted to become fit, to try a sport that my dad was devoted in and to achieve new things that I haven’t in my life.” – Sue Bin Oh

The World Cadet Challenge will be a big step up for the young Aussie, who will be looking to put her defensive skills to the test.

“I think it is a great experience for me to take part in a very advanced competition. I look forward to performing at a high level and also improving my table tennis skills.” – Sue Bin Oh